An RAF Air Cadets Officer Commanding has been given a prestigious award on the Queen’s Birthday, as he retires after 45 years in the organisation.

To mark his last night, cadets and staff had organised an evening designed to take him back to when he first joined as a cadet in September 1969. The cadets led Flt Lt Collins in a drill practice, before he was given classroom-based exercises in first aid and radio communications.

During his time in the organisation, Flt Lt Collins attended numerous camps at RAF bases in the UK and overseas, and has the Kent Wing team for the Four Days Marches Nijmegen in the Netherlands for six years running. As a cadet, he made the most of the opportunities available in the RAF Air Cadets, from completing his gliding scholarship to achieving his Gold Duke of Edinburgh’s Award. His time in the organisation also shaped his personal life, as there he met his wife, Theresa, who was also commissioned in the RAF Volunteer Reserve Training Branch, and his son, Alan, remains an adult volunteer at Gillingham Squadron, with the rank of Sergeant (ATC).

After his final parade, Flt Lt Collins handed over the running of Gillingham Squadron to Sgt (ATC) Matthew Bairnsfather, one of hundreds who have seen cadet service under the departing Officer Commanding.

Flt Lt Collins said “I was deeply honoured and truly shocked to have received such a prestigious award, but must also thank those who have helped me over the past 45 years and made my time in the organisation so enjoyable and fulfilling.

“The RAF Air Cadets is a fantastic organisation, with many wonderful opportunities for young people, and it has been a privilege to be a member for such a long period of time. In particular, watching so many young men and women grow and develop is something I am going to miss.

“However, I have great confidence that Sgt (ATC) Bairnsfather will continue to take Gillingham Squadron from strength to strength, and I wish them all the best of luck for the future.”

Sgt (ATC) Bairnsfather added “It is a sad day for Gillingham Squadron, losing an Officer Commanding who has such a wealth of knowledge and experience.

“Running a squadron is a demanding task, but one which Flt Lt Collins has carried out with distinction for many years. I hope that I will carry on his excellent work with as much energy and pride as he has brought to the role.” 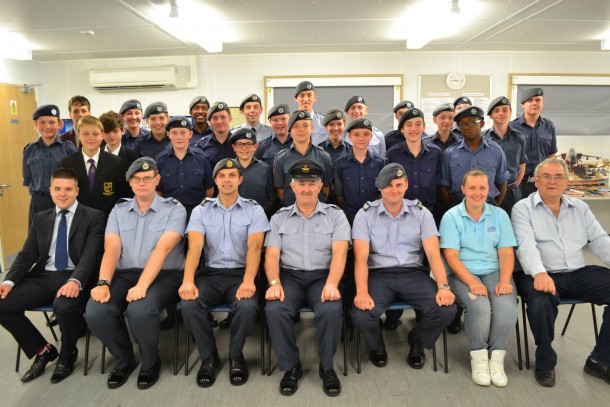 Flt Lt Collins will be officially dined out of the RAF Air Cadets at Gillingham Squadron’s Annual Dinner on Saturday, 21 June, and remains Chairman of the Medway Towns Branch of the Royal Air Forces Association.