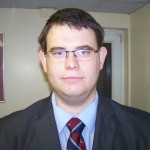 Outside of the RAF Air Cadets, Mr Collins works for a local firm of solicitors and is also the Honorary Treasurer of The Royal Air Forces Association Medway Towns Branch.

Mr Collins says “During my time as an RAF Air Cadet, I enjoyed a wide range of opportunities I would not have experienced anywhere else. I enjoy being an adult volunteer and playing my part in ensuring that the next generation of cadets can enjoy the same opportunities that I had.”