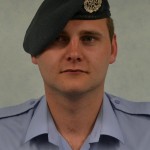 Outside of the RAF Air Cadets, FS (ATC) Pearmain works as an electrical engineer.